It was an historic weekend for Boyle GAA Club as its Cooney Motors sponsored U14s reached the All Ireland Semi Final of the National Féile na nÓg football competition which was staged in Cork, Kerry and Limerick. The Boyle team was based in Kilshannig GAA Club, Co Cork.
The adventure commenced on Friday when Boyle played its first two group games when they defeated Coralstown/Kinnegad and drew with Kanturk Wolfe Tones. They defeated the home team on Saturday morning. These results meant that Boyle topped the group and qualified for the quarter final in which they defeated Father Caseys, Abbeyfeale in Druncolliher on Saturday afternoon. It was then on to Kanturk to participate in the colourful parade of teams through the town.
Sunday morning saw the lads travel to Tralee to play Lucan Sarsfields in the All Ireland Semi Final. Despite a very brave performance, their adventure came to an end as they lost to a physically stronger and very skilful outfit.
The Club is immensely proud of the entire panel who were exemplary in their footballing skills and overall behaviour throughout the weekend.
The Club extends its thanks to the entire panel and to their dedicated management team of Gerry Cregg, Odran Feely, Noel Casey, Leonard Sutton and Simon O’Donnell, all of whom have worked so diligently for this event since last autumn. The Club also wishes to thank the Féile Committee which worked tirelessly to ensure that necessary funding and logistics were in place. A special thanks is extended to the Kilshannig families who hosted our lads over the weekend, and to the huge numbers who made the trip from Boyle and elsewhere to support the team. Thanks also to Cooney Motors and all other sponsors. Their next game is against St. Ciaran's in the championship on Thursday evening in Fuerty at 7:30pm.

Congratulations to the St Joseph’s BNS team which won the Cumann na mBunscoil County title last week.
The Cooney Motors/Cooney’s Centra Juniors lost to St Barrys in the Division 4 League in the Abbey Park on Sunday.They will play Clan na Gael in Johnstown on this Wednesday at 8pm and they will play St Dominics in Knockcroghery on 6th July. They are scheduled to play Tulsk in the Junior B Championship on this Friday evening.
The McGovern Directional Drilling Seniors will play Roscommon Gaels in the O’Rourke Cup on Sunday next at 2pm in Abbey Park.
Our James Lannon Motors U16s lost to Kilbride in the U16 League on Sunday. Their outing is against St. Croan's on Thursday evening in Enfield at 7:30pm.
The U-12 lads were defeated by Roscommon Gaels in the championship on Sunday.
Congratulations are extended to Cian McKeon and the rest of the Roscommon Minor panel on their Championship win over Sligo on Saturday and we wish them every success against Galway on this Wednesday evening in Kiltoom.
Sympathy is extended to the Nicholson and Lennon families, Boyle on their recent bereavement and to Mrs Mary Kelly, Boyle and the Brennan family, Kilteevan on their bereavement.
All GAA Club members and supporters are reminded that the National Blood Transfusion Service will be in St Joseph’s Hall, Boyle on this Wednesday from 4pm to 8pm. Blood supplies are especially at this time of year and they are making a special appeal for your support.
Ladies Football
Abbey Park will host two very important Ladies Football games this week. On Wednesday there will be an U16 All Ireland Championship Qualifier between Sligo and Longford, while on Friday at 6.45pm Abbey Park will host an U14 All Ireland Final between Sligo and Leitrim. The Club will require members of both the male club and ladies club to make themselves available to act as stewards.

Posted by realboyle.com at 12:55 AM No comments:

Hilary Clifford and Thomas and Eoghan Furey were €20 winners at the most recent Club Lotto draw which was held in Dodd’s Bar. The house prize was won by Jack Morris. The jackpot wasn’t won and it will be at a new record high of €11,800 for this Saturday night’s draw which will be held in An Craoibhin. Team C will be in charge. Don’t forget that tickets can be purchased in most outlets in town throughout the week.

This is a special week for our Cooney Motors sponsored  U14 footballers as they will represent Boyle and Co Roscommon in the Féile National Football Tournament in Kerry, West Limerick and West Cork this coming weekend. This is a major honour for this talented group of players and their dedicated management team and we wish them every success. They will play 3 games in their group, two of them on Friday evening (Coralstown-Kinnegad and Kanturk) and the other on Saturday morning (Kilshannig). All of them will be played in Kilshannig, Co Cork. No doubt there will be lots of vocal support for the boys. We request that Boyle or Co Roscommon “natives” living in Cork would come out to Kilshannig to support the lads.

The McGovern Directional Drilling Seniors went down to a superior St. Brigids in the second round of the County Senior Championship on Friday evening last in Kiltoom. Their next outing will be against Roscommon Gaels.

The Cooney Motors/ Cooney’s Centra Juniors have two Division 4 League games scheduled for this week. They are listed to play Clan na Gael in Johnstown on this Tuesday at 8pm, and they are due to host St Barrys in Abbey Park on Sunday next at 2pm.

The James Lannon Tyre Centre U-16 play Kilbride in the Division 3 championship this Sunday in the Abbey Park at 12pm.

The U-12 Division 1 team were defeated by Roscommon Gaels in the League final yesterday. Well done to all the lads and management on reaching the final.

The U-10's were runners-up at a blitz held in Ballyleague over the weekend, congratulations to all involved. Please check Boyle GAA facebook page for team photos.


The Intermediate ladies play Kilglass Gaels in the first round of the championship on Saturday June 25th in the Abbey Park at 7:30pm. Well done to the U-12 girls who defeated St. Barry's in the Division 1 quarter-final. Semi-final scheduled for July 3rd. Details TBC. The U-14's resumes training this evening.

Posted by realboyle.com at 4:31 AM No comments:

Pride of place in the club this week goes to the Cooney Motors/Centra U-14s who were crowned Division 1 League Winners after defeating Padraig Pearses in Creggs on Friday evening last. Well done to the players and all involved with the team.

Congratulations to all involved in Roscommon's Connacht championship semi-final victory over Sligo, the final game to played at Hyde Park before it goes under reconstruction. Well done to Sean, Donie and Enda who made telling contributions to the win.

The McGovern Directional Drilling sponsored Seniors are out in the next round of championship when they travel to Kiltoom on Friday evening to play St. Brigid's with an 8pm throw-in.

The U-12's Division 5 team were very unlucky to be defeated after extra-time in their league final against Kilmore in Elphin on Saturday last. No doubt these lads will be back contesting finals very soon and will have long successful playing careers in Boyle and Roscommon colours. Well done lads and thanks to the management team.

The club kindly asks all facebook users to please log on and vote for Boyle GAA Club in the Version 1 competition with the chance to get €1,000 which will go towards a new set of jerseys for the U-12 panel. The panel consists of 35+ players so please take the time to vote. Details on how to vote can be located on the Boyle GAA Club facebook page.

The U-12's defeated Roscommon Gaels last week and are now into the Division 1 championship quarter-final against St. Barry's in Tarmonbarry on Friday, time TBC. Boyle Intermediates play Kilglass Gaels in the first round of the championship this Saturday at 7pm in the Abbey Park. Please come out and support this very talented team.
Posted by realboyle.com at 1:34 AM No comments: 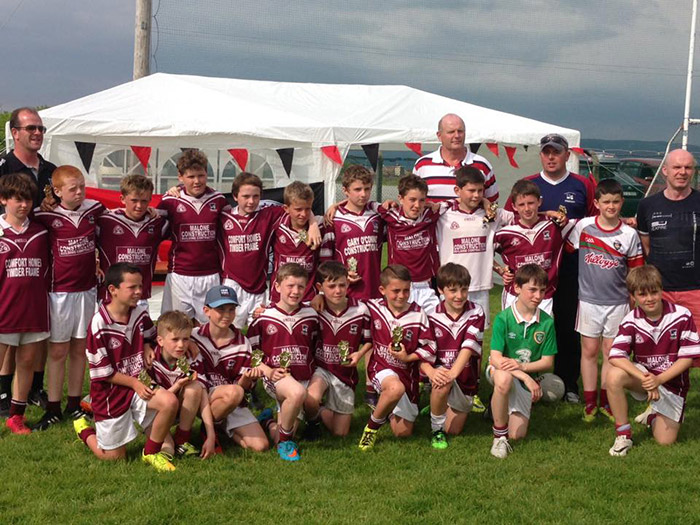 Congratulations to the U-12 team who were runners-up at the Clifford Cup held in Sligo over the weekend. The U-12 division 5 team play Kilmore in the league final this Saturday at 1pm.
The Cooney Motors/Centra sponsored U-14s play Padraig Pearses in the Division 1 league final this Friday at 7:30pm. Please check sports section in the Roscommon Herald for both league final venues.

€20 winners of the last lotto held in the Moylurg were Eamon Perry and Sabrina Finn. The house prize was won by CA Disney from Frenchpark. This weeks draw will be held in Dodds with Team B in charge. The Jackpot stands at a new record of €11,700. Tickets can be bought at most businesses around the town.

Thank you to all who supported the U-14 Feile team fundraising Car Wash held on Saturday last and team sponsor Cooney Motors/Centra who allowed the team use their facilities.

Boyle GAA have a chance to win a grant of €1,000 to fund the purchase of a new set of jerseys for the Under 12 Team. All we need you to do is to click on the attached link and VOTE FOR THE BOYLE GAA VIDEO in the Version 1 Community Trust Awards. We need all the votes we can get, so please share this amongst all your friends.

Posted by realboyle.com at 3:55 AM No comments: