Senior Club:
In Division 2 of the National League Donie Smith 0-4 (2 frees), Enda Smith 1-0 (penalty) and Cian McKeon 0-2 (1 free) all played influential parts in Roscommon's win over Kildare, on a score line of 2-11 to 0-13. All roads now lead to Dr. Hyde Park next Sunday where Roscommon play Westmeath at 2pm.

Minor Club:
The Lannon Motors Boyle U-16 Division 1 team lost out to Strokestown in the league in the Abbey Park on Sunday. Both teams exchanged points in the early stage of the first half but a penalty converted by Strokestown, and two fortuitous goals conceded by Boyle, left the half time score at 3-06 to 0-07 to the visitors. The second half started as did the first, with both teams trading points. Boyle were unlucky to be reduced to 14 players midway through the half but didn’t let the numerical disadvantage tell and they dominated for long periods after the sending off, missing a penalty in the process. Final score: 0-13 to 3-12.

Ladies Club:
There will be another registration night for anyone that missed the last one this Wednesday, February 26th from 7-8pm.

There are two fixtures on Sunday, March 1st:
• Adult Ladies League V Shannon Gaels in Boyle at 12 noon;
• U16 League V Oran in Oran at 4pm.

Lotto:
The numbers drawn in the lotto draw on Saturday night were 1, 15, 29 and 32. The weekly winners were Bernie & Maurice Mullins, Benny Morgan and Niamh Reynolds. Next week’s jackpot is €4000, and the draw will be held in the Moylurg.

Condolences:
Boyle GAA Club would like to extend sympathies to the Clann na nGael community, and the family of referee Morgan Keena, following his untimely passing. Ar dheis Dè go raibh a anam.

Posted by realboyle.com at 11:58 PM No comments:

It was a quiet week on the pitch this week. Next weekend sees Roscommon play Kildare in an away fixture, and we wish Roscommon, and the Boyle lads involved in this game, the best of luck.

Minor Club:
Both the U14 game v Kilbride, and the Minor game v Kilmore/Shannon Gaels/St. Ronans, were postponed due to the inclement weather. Keep an eye on social media for re-fixtures. Our Division 1 Lannon Motors sponsored U16 team play Strokestown at 11:00am in the Abbey Park on Sunday 23rd February.

Lotto:
The numbers drawn in the lotto draw on Saturday night were 2, 3, 12 and 18. The weekly winners were Gary Wynne, David Hannon and Brian McCrann. Next week’s jackpot is €3900, and the draw will be held in Creightons.

Well done to all. Thanks to everyone who supported our draw. Remember that all entries go into the National GAA Club Draw which takes place on Thursday March 12th.

Senior Club:
Well done to Senior players Enda Smith (0-01), Cian McKeon (0-03f) and Donie Smith who featured for Roscommon in their 1-08 to 0-04 win over Clare in the Division 2 League at Dr. Hyde Park on Sunday.

AGM:
The Senior Club held their AGM on Friday 3rd January, and some further positions were ratified at the Monthly meeting on the 6th of February, as follows: 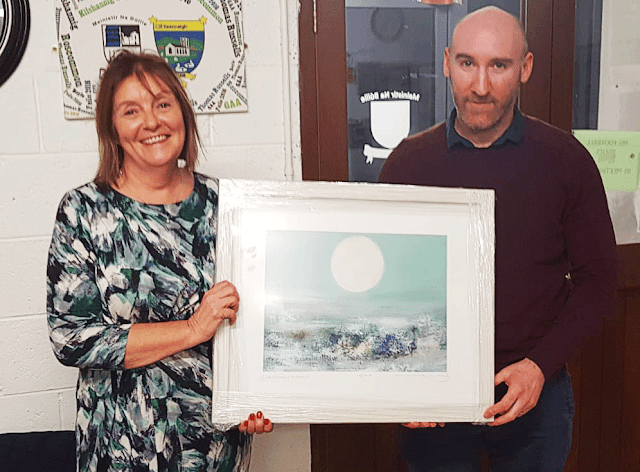 Minor Club:
The U16 game v Clann na nGael which was due to be played at 11am on Sunday in the Abbey Park was postponed due to the heavy rain.

Lotto:
The numbers drawn in the lotto draw on Saturday night were 2, 8, 11 and 18. Thank you to our envelope sponsors - Brogans and Natural Options. The weekly winners were Carmel Goldrick, Anita & Paul Kearney, and Peter Keane. Next week’s jackpot is €3800, and the draw will be held in Dalys, with Martin Dolan's team in charge. There will also be a special draw on the night for all who have purchased National Draw tickets.

Sympathy:
Boyle GAA Club would like to extend sympathies to Barry and the Lowe family on the death of their father Jackie. Ar dheis Dè go raibh a anam.

Posted by realboyle.com at 12:06 AM No comments:

Boyle GAA had their full complement of county players feature in the second game of the Division 2 League against Fermanagh in Brewster Park on Sunday. Enda Smith, Donie Smith (0-02f), Cian McKeon (0-04f) and Evan McGrath (0-01) all made significant contributions, but it wasn't enough to stave off a spirited second-half comeback by Fermanagh, with Roscommon losing by a single point on a scoreline of 0-13 to 0-12.

Congratulations to Cian McKeon who was part of the DCU panel that won the Sigerson Cup Final on Wednesday night against Carlow IT in the DCU sports grounds. This is a great achievement and all in Boyle GAA are delighted for Cian who is having a great year so far for his College and County.

National Club Draw:
Not long left to purchase tickets for the National Club Draw which has 20 high profile prizes up for grabs ranging from a car to All Ireland tickets, a holiday and many more. Furthermore, every ticket purchased before 15th February will also be entered into a special Boyle GAA club draw so each ticket gives you two chances to win. Special Boyle GAA Club Prizes include (1) Tickets for 2 to a Manchester United Home Game plus accommodation; (2) Crate of 12 Bottles of Wine; (3) Signed Roscommon Jersey; or (4) Buffalo Boy Voucher.

Give it a go! This is an important fundraiser for our Club!

Ladies Club:
There is a registration night on Wednesday the 5th of February in the clubhouse from 7-8 pm for ladies teams at all ages.

Well done to Boyle representatives Roisin and Saoirse Wynne, Sinead Glennon, Kate Harrington and Gary Wynne (selector) in their win for Roscommon over Laois in the LIDL Ladies NFL Division 3 Round 2 game.

Lotto:
The numbers drawn in the Lotto draw on Saturday night were 4, 11, 18 and 24. The weekly winners were Noel & Mary Scally, Kyle McLoughlin, and Peter Byrne. Next week's jackpot is €3600 with Johnathan Wynne's team in charge and the draw will be held in Mattimoes.

Posted by realboyle.com at 11:45 PM No comments: