Senior Club
Our Cooney Motors/Cooney Centra sponsored Junior A team overcame Castlerea St. Kevins in their relegation playoff in Strokestown on Saturday night, winning on a scoreline of 4.07 to 1.10. Despite missing a number of players from the previous week's encounter, the lads played with great determination and were certainly not lacking in creativity, with some excellent passages of play which opened up the Castlerea backline for 4 goals.

The stand out player throughout the campaign was Connor Deery who led the forward line with excellent scores in all games - well done Connor. There is also a very welcome addition in Colin O'Sullivan to midfield and it is great to see players like Conor Lavin and Niall Brennan back in the fold and making telling contributions this year. Special mention also to David Kelly who has been playing his best football for years in the full-forward line. Thanks to all the players. Special thanks to Mark O'Connor who managed the team and kept them going throughout the campaign against all the odds, amidst the challenges of a very tough group and the loss of players. Thanks to Michael Hanmore, Conor Tivnan, and Karl Kelly for their input throughout the year on the line and to Michael Bermingham, Kevin Mullen and Steve Tonry for their input in the latter games.

Minor Club
Congratulations to the Lannon Motors U16’s who came joint top of the Division 1 Championship with Roscommon Gaels. Having played 6 games, winning 5 and drawing with Roscommon Gaels, a coin toss was needed to decide who would go straight to the final and who would compete in the semi-final with Eire Óg/Michael Glaveys. Boyle won the toss and now await the semi-final winners. Date and venue are yet to be decided. Well done to both players and coaches on an already brilliant campaign so far. Now we dream of County Division One Champions returning home to Boyle.

Ladies Club
It was a tough day for our Ladies who were beaten in the Intermediate Final by St. Brigids on a scoreline of 2.09 to 0.08 on Saturday morning. Special thanks to the Ladies and management who brought such a buzz to the town and entertained all year with some excellent football. The mood after the game was probably best captured by Ladies Chairman Noel Scally, and we certainly agree with Noel that this team will be back:
On behalf of Boyle Ladies Club we would like to congratulate the team and management on reaching the Intermediate County Final. It has been a great year for the team. Unfortunately, yesterday was not our day but the team is young and will be back in 2021. We would like to thank the management for their time and commitment during the year and congratulations to St Brigids. A special thank you to all the parents and supporters who came to the game and supported the team- it was greatly appreciated by all".

Boyle Camogie
Congratulations to the U12 Boyle Cheetahs who won the U12 League B Final v Athleague on Sunday evening in Athleague. The photograph shows the victorious panel with the shield. Well done to team and management! (Photo courtesy of Boyle Camogie) 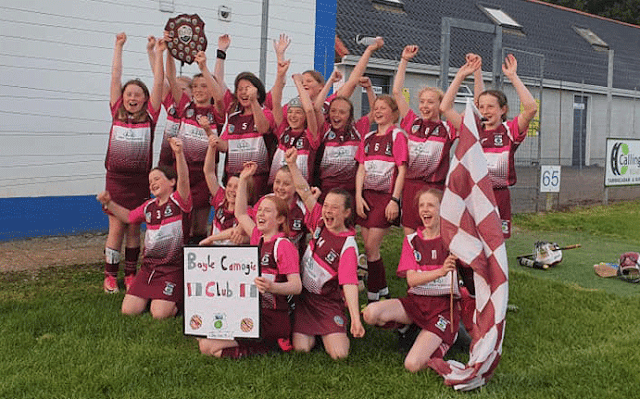 Our weekly GAA Lotto is now online.
How to play:
You can access at the following link: https://www.klubfunder.com/Clubs/Boyle_GAA/lotto
You can also download the app: https://play.google.com/store/apps/details?id=com.klubfunder

Lotto Results:
The draw was held in the clubhouse Sunday night and was streamed online.
Numbers drawn were 11,17, 28 and 31. There was no jackpot winner.

Match 3 winners were Gus Gannon and Olive & John Filan.
Our jackpot next week will be €5600

Posted by realboyle.com at 4:54 AM